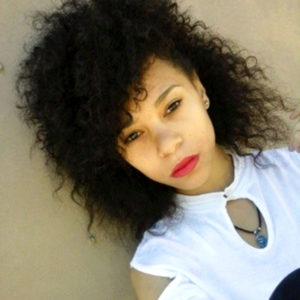 Monicha Robynene Rooks, age 20, was born in the Mother City on 14 February 1998. The Valentine’s day babe, is one of four siblings and describes herself as ‘the odd one out’ as she  has very little in common with them.

Being the artistic one in the family, Monicha says that there are a few things in life that gives her hope the way performing arts does. She wrote her very first poem when she was in grade 2 and was helped by her mom. “I loved the way the words rhymed and still made sense. I was immediately intrigued by it when mom introduced me to it”. Monicha was 17 years of age when she discovered her talent for rap. “One moment I was reciting my poem then all of a sudden I was spitting bars”, she says, laughing. She participated in the ATKV-Crescendo Liedjieslypskool competition as an Afrikaans upcoming artist where she met Hemelbesem, YOMA, Die Hooflig and many more Afrikaans artists.

She was also blessed with the talent to sing and composes her own songs. “To date, I’d say I have more than 8 songs written by myself and I find myself in studio as often as I can.” Her vivid imagination is the one source which strengthens her writing ability.

At a tender age, Monicha fell in love with contemporary dance. “I enjoy freeflow, that is when I get to connect with my Higher Being as I give all praise and honor unto Him. There’s something so powerful yet indescribable about contemporary dance. It’s where I feel safe, and heard. What’s beautiful is that every time I dance, it feels as if I’m experiencing it for the first time.”

During her matric year, Monicha was diagnosed with hyperflexion in the knees. “After I got home from dance class, I fell asleep on the couch as I was extremely tired. I remember how painful my legs were when I woke up hours later.” She was given crutches for 6 months with the promise that if the situation didn’t change within the period of time, an operation would be taken into consideration. Being a Christian, Monicha believed that despite what doctors had said, she would still be able to heal without considering the operation as she was dependent on her Higher Being.

Her due date was approaching, yet she was still struggling to move like the energetic Monicha. She then met a bishop and pastor who offered to pray for her and she took the leap of faith by asking them to align her knees again, through prayer. Monicha kept the faith throughout the spiritual operation and without doubt, God’s presence was there.

Until today, Monicha still hasn’t gone for the operation and has been walking ‘crutch-free’ ever since.

Monicha continues to live life to the fullest and believes that everything happens for a reason. She strives towards succeeding in life and pure utter happiness.