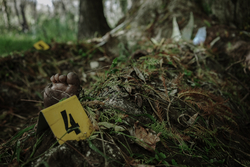 When the bodies of six children are found in the backwater forests of Donkerbos, Limpopo, an ostracised detective (multi-award-winner Erica Wessels from Dwaalster and i am ALL GIRLS) must wrestle with her dark past, her family, and a distrustful community to catch the killer before another child is taken.

Why did you want this role?

I really wanted this role. Really, really, really. It rarely happens that you audition for something and want the role so badly.

And the reason for that was the screenplay. I always wanted to work with Nico [Scheepers, writer, and director]. But when I read those texts I was just like, ‘Oh my goodness, I want this!’ It’s really the best thing I’ve ever read in Afrikaans.

That’s high praise. What impressed you so much about the script?

The text is so well written. And it’s awfully dark. It’s the darkest thing I’ve ever done.

What I liked most about the script is not only that it is dark or the incredible characters and beautiful storyline; what was very interesting for me is that it is a thriller, but still I got so emotional.

I cried terribly while reading the screenplays. I asked myself why I was crying like that. What is it about Nico’s writing style that makes me cry so much? And then I just realized: sometimes you can’t pinpoint it.

I do think it’s partly because it’s about children, children who get hurt, and I’m a mother. Children are the most vulnerable in our communities.

Tell us about your character, Fanie.
She is a great character. She is extremely good at what she does. She is strong and abrupt and difficult, but she commands respect. She hates injustice. She is actually an incredibly good person, but under this brash, the hard exterior of getting shit done. I love her.

These days there are numerous stories with women in the lead role as flawed protagonists; it’s fantastic. Funnily enough, a lot of the roles I’ve always gotten are pretty much that type.

What I really like about Fanie is that she is very different from me. Yes, very, very different from me. For some reason, I’m always cast as a Hawk or a policewoman but I’m actually the opposite of the characters I play. My friends who know me well laugh their asses off, because I’m actually very feminine and I would never buy a firearm, for example. I’m an empath. I’m soft-soft-soft-soft but strong.

So Fanie comes from another world, and I am delighted to take on such characters, who are completely different from me. It allows me to discover a whole new world inside someone else, which is what I love and why I act.

What have you enjoyed about playing Fanie?

Usually, even if you are a strong female character or a protagonist that happens to be female, there is often a reasonable focus on glamour, beauty, and the exterior. This is probably just one of the languages ​​through which we are validated.

What’s really cool about Fanie for me is that there is not that focus, which I dig. For Donkerbos, I basically don’t wear any makeup; I look like a bum every day. Wrinkles and pimples and no nails and all that.

There is something very nauseating to me about this obsession with being ageless and what it means to be a woman.

Why should audiences watch Donkerbos?

I think people are drawn to good writing and good storytelling. Watching Donkerbos, you’re going to want to know who the murderer is, and you’re going to want them stopped before another child dies, and it’s going to keep you guessing til the end. But it’s more than just a whodunnit; it’s a whydunnit too, which will make you feel empathy in ways you don’t expect.

While you wait for Donkerbos to premiere on 29 November 2022, binge Scheepers and Nagvlug Films’ critically acclaimed series, Nêrens, Noord-Kaap, on Showmax. The family drama, which won Best Editing at the 2022 SAFTAs, stars Albert Pretorius, Geon Nel, and De Klerk Oelofse as estranged brothers who return to their family farm against the backdrop of the harsh Northern Cape landscape, and the ghosts of their shared past. Frank Opperman and Ilse Klink co-star. As News24 said in their 5-star review, Nêrens, Noord-Kaap “is a triumphant showcase of the best that local TV has to offer… You’ll want to savor every bite of it.”

Cosmopolitan Lingerie 2012: SEXIER than ever!