Less Is More With Convertible Clothing 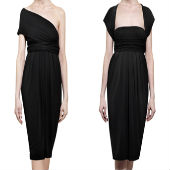 At first glance, it appears to be nothing more than a swath of fabric. After some deft and swift handiwork, involving a tuck here and a knot there, that same bit of material magically morphs into a sexy halter neck dress.

On a whim, the wearer changes her mind. But instead of changing into something else entirely, she simply performs some more origami on the cloth, redraping, tying and twisting and voila: the same fabric transforms into a chic, off-the-shoulder affair.

Such shape-shifting garments are one (or multiple-in-one, we should say) of the hottest trends in fashion right now. For consumers still left cash-strapped due to the recession, the appeal of such convertible apparel is that even though you only pay for only one thing, you get so much more for free.

The economical trend has even caught on with couture designers. Donna Karan’s six-in-one Infinity jersey dress can take its wearers from the boardroom to the ball room after just a few skillfully executed steps. Discount department stores, such as US-based Target, offer variations on a similar multiple-in-one theme to those shoppers who find Karan’s Infinity’s $1 000 price tag somewhat above their budget.

Other than its more-for-the-price-of-one bargain aspect, convertible clothing has other merits as well. For one, having an outfit with multiple personalities allows wearers to have more room in their closets and travel much lighter. It also enables wearers to get creative and become their own personal stylists.

However, not every religious fashionista seems eager to convert to this trend. These outfits can be a bit difficult to figure out, which has led to a spate of how-to videos on YouTube to demonstrate how to reconfigure the garment into its different incarnations. “I’ll always be a bit wary of clothing that requires a how-to video (or an iPhone app),” Amber Garrett wrote on shopping blog We Covet (http://moxiebird.com/2010/12/we-covet-convertible-clothing-that-actually-looks-chic.html) .

For others, the effort and dexterity are worth it when they end up wearing something entirely unique.

Get Your Vintage Fashion Fix